How a treasured recipe, a family farm, and a vision of innovation helped change the way America eats.

The Seeds of a Dream

Like many Italian farmers in the late nineteenth century, the Picetti family dreamed of a better life. So in the 1800s, they joined thousands of immigrants who had crossed the Atlantic in search of opportunity in America. They brought only a few prized possessions, but one of them would turn out to be their greatest treasure: their family recipe for Pesto alla Genovese, classic Genoa-style basil pesto.

But we’re getting ahead of ourselves. Our American story really begins around the turn of the century, when Guglielmo Armanino left Varese Ligure, the picturesque hilltown near Genoa on Italy’s northern Mediterranean coast in search of farming work in the US.

Like the Picettis and so many other Italian emigrants before him, he set his sites on the San Francisco area, where the latitude, hilly terrain and mild coastal climate are about as close to Liguria’s as you can find in the US.

Guglielmo found work as a farmhand, but when World War I broke out, he returned to Italy and joined the army. But his American experience had changed him. He had seen the promise of opportunity, and it was impossible to resist. In 1921, he moved back to San Francisco and soon became a US citizen.

He started farming in the Bayview region San Francisco’s south side, an area know at the time as Butcher Town, because it was home to the city’s cattle ranches and slaughterhouses as well as a bustling farmers’ market.

Through the tightly knit Ligurian immigrant community, it didn’t take long for Guglielmo to meet the love of his life, Mary Picetti—of the Picetti family that had come over with that pesto recipe in the 1890s. The couple married in 1922. Mary was a great cook, and her pesto, made with basil from the Armanino farm was one of her signature dishes—a tasty reminder of Mary and Guglielmo’s Ligurian roots.

As a row-cropper, Guglielmo grew vegetables and herbs to sell at the Butcher Town market to the growing Italian immigrant community that was establishing itself in San Francisco.

By the late 1920s he and his family had developed a thriving business, and the Armanino name had become synonymous with fresh produce.

Guglielmo and Mary, along with Mary’s brother, George Picetti, kept on farming through the depression and the 1940s. But it was their son, William J. “Bill” Armanino, who would take that business to a whole new level.

Bill Armanino had a larger-than-life personality and an insatiable appetite for fun and adventure. By the time he was in his 20’s, he had already been a semi-professional baseball player and formed his own big band, the Armanino Rhythm Makers, that played the San Francisco nightclub circuit.

But to his hardworking father all of that seemed frivolous. In the late 1940s, Guglielmo told his son it was time to “stop playing around and get a real job.” Coming from a family of great cooks and produce farmers, Bill decided to try his hand at foodservice and opened Armanino’s Deli, an Italian food emporium on San Bruno Avenue in South San Francisco.

By the time Bill sold the deli two years later, he realized he could combine his love of adventure and business as a food entrepreneur. He knew he would eventually take over the family farm, but he sensed that there were bigger opportunities for that farm beyond the local produce market.

It was a time when mass-production was changing the American food scene. Canned and frozen convenience products were filling retail shelves and freeing up housewives from the “drudgery” of cooking. Bill wondered how the farm might play a part in that food revolution. So he went straight to the experts and landed a job at Kraft Foods, where he got a crash course in the mass production of food and dairy products.

One of the Armanino’s biggest crops was chives—an herb that was virtually unknown in the US at the time. The Armaninos were growing them mostly to sell to Italian immigrants. But working at Kraft, Bill had a big idea. Why not pitch his family’s chives as a way to add flavor and color to one of Kraft’s signature products: sour cream. Yes, that sour-cream-and-chive flavor combination we all know and love came right out of the brain—and the business sense—of Bill Armanino.

Kraft bought the idea on the spot, and the Armanino farm immediately began supplying chives to the company. By the 1960s Bill began looking for a way to scale up chive production and ensure consistent year-round supply. He struck up a partnership with a food-science lab at UC Davis that was pioneering the new technology of freeze-drying, and within a few years, the Armaninos were selling freeze-dried chives to Kraft by the truckload.

Bill’s chive sour cream idea had helped pave the way for chives to burst onto the food scene, and as demand for the herb skyrocketed, the Armanino’s began selling freeze-dried chives to retailers, packing private-label chives for grocery chains, and selling chives and other herbs to foodservice and food manufacturers. 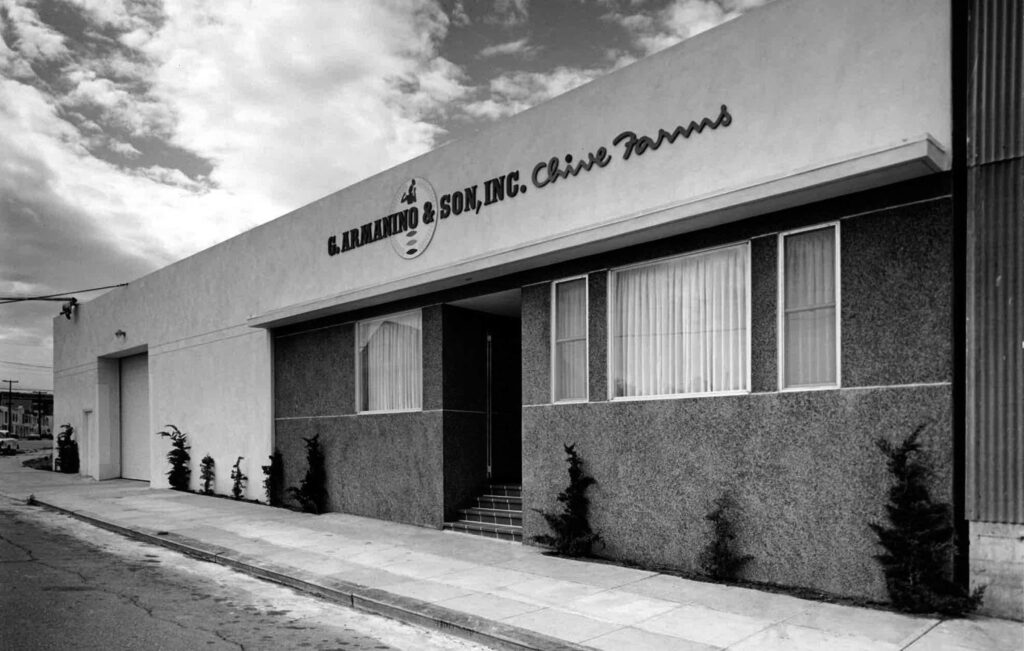 By the end of the 1960s, Bill had transformed the family business from local farm to national herb supplier. Now he needed an idea that would take the company to a whole new level. As it turned out, that idea was no further away than his mom Mary’s kitchen: that treasured basil pesto recipe that she’d brought over from Liguria.

Today, pesto is a familiar flavor in American cooking—so familiar, in fact, that we hardly even think of it as Italian any more. But back in 1970 no one in the US but a handful of northern Italian immigrants even knew what it was.

Meanwhile, in America’s Italian restaurants, fresher, lighter flavors were beginning to replace red sauce and meatballs as regional Italian food was capturing the imagination of consumers and the media. Bill had a hunch that pesto could be the next big thing. That hunch turned out to be a brighter idea than he could ever have imagined.

In the early 1970s, he set up America’s first commercial plant to produce classic Genovese pesto made with farm-fresh basil and began selling it to the retail market. And the rest is American food history.

Armanino became the nation’s leading pesto supplier, helping turn an obscure Italian sauce into one of America’s favorite flavors. And that was just the beginning.

Throughout the next 5 decades, Bill, his family and his growing team of employees worked tirelessly to diversify the company’s offerings. In the ’80s, Bill partnered with none other than Frank Sinatra to create a line of Italian sauces under the Artanis brand (you guessed it: that’s Sinatra spelled backwards). And ever since, the growth and innovation have just kept coming.

The family took the company public in 1988, relocating from South San Francisco to its current location in Hayward, just across the bay. And today, Armanino Foods has built on its pesto heritage with an ever-growing line of globally-inspired pestos, sauces and spreads supplying restaurants and grocery stores all across North America and around the world.

A legacy of family and flavor

When Bill Armanino passed away in 2009, he left behind more than a thriving company, now run by the next generation the Armanino’s.

He left a legacy of food innovation inspired by family, heritage and the highest standards of quality. It’s a legacy of bold, exciting flavor and innovation that still guides the company today—and still plays a part in shaping the way the world thinks about cooking and eating. And in that spirit, we’re proud to carry on the tradition of bringing fresh thinking, fresh flavors and a world of pestobilities to your business.